We ship to most countries worldwide!

(No reviews yet) Write a Review

A great product to get a great Bikini Line... 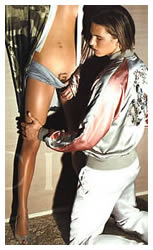 underarms, knees, ankles, and of course, the bikini area. Not only is the blade curved but it's cryogenically tempered, enabling it to last far longer than any other standard or typical disposable razor. And although it too is a disposable razor, months can go by before you actually need to replace it.

The cryogenic treatment consists of subjecting the blade to a temperature of minus 270 degrees below zero for a 24 hour period and then bringing it back to ambient or room temperature. In a nut shell the cryogenic process just slows the molecules to a virtual stop and realigns the molecular structure of the existing molecular bars which connect to each other.

There is so much stress on the stainless steel from the rough grinding, finish grinding, honing, heat treating, stropping, stretching, spattering, breaking, and hole-punching necessary to create a blade that the metal has physically broken down before it is even used for the first time.

When a blade is cryogenically treated after all this stress is induced it returns the stainless steel back to its original molecular structure. The stress is removed and the steel regains the many attributes it was originally selected for. That's basically why it lasts so long.

Do men use the Bikini Plus Razor?

Bikini Plus! Don't let the name fool you, men can use it too on all the same places a woman can, and it's perfectly contoured for shaving the neck. We recommend using Total Shaving Solution (TSS) shaving oil in conjunction with the Bikini Plus.The Bikini Plus works particularly well if you are sporting more than a day's growth.

Think it's too expensive?

It costs more than most mass produced razors, but you have to remember that the Bikini Plus razor has a unique curved blade which is created using an intricate and expensive cryogenic process. To our knowledge, the Bikini Plus is the only curved blade razor in the world. Additionally, the cryogenically tempered blade lasts much longer than a conventional disposable razor.

Ultimately, you have to try it to believe it!

MSRP:
Now: £24.97
Was:
his unique razor features a very narrow blade width. It is a speciality shaving razor fulfilling a gap where other razors are just too big for the job. This proprietary, innovative, and ergonomic...

MSRP:
Now: £14.95
Was:
Mini razor  Preen and perfect your eyebrows with the Lilibeth of New York Brow Shaper; a high performance, pain-free hair removal tool to define the brow line without tweezing or waxing...

MSRP:
Now: £64.96 - £74.96
Was:
Say goodbye to irritation, nicks, bumps, and clogs. The Single Edge safety razor is engineered to provide you a lifetime of smooth shaves. Includes a ninety-day supply of blades (that's 8...

MSRP:
Now: £28.79
Was:
Razorpit Original Razorpit Original has a unique design with a Razor holder. This helps your razor blade dry quickly, which also helps remove excess water that can dull the blades. Razorpit...

MSRP: £39.98
Now: £38.00
Was:
100% true Natural Organic Cotton. The cotton is totally pure, free from dyes, toxic chemicals and carcinogens. In addition, we practice fair trade which means the farmers earn a fair wage so the...

MSRP:
Now: £49.96 - £50.99
Was: £69.98
Japanese Design Intimate Area Shaving Kit An easy, pain free hair removal kit for the bikini/ pubic/ crotch area that will leave you super smooth with fewer bumps and ingrown hairs. This is the...

MSRP: £29.99
Now: £39.59 - £39.98
Was:
We are an Authorised BaKblade Retailer. When purchasing from us you can be rest assured you are receiving an authentic product with easy access to replacement blades. All backed up by great customer...

After Inked Sachets 7ML Box of 50

MSRP:
Now: £55.00
Was:
Great on new tattoos, old tattoos, permanent make-up, piercings and after laser tattoo removal. AFTER INKED is used by some of the very best tattoo artists and studios in the world. It is a premium...